Agritech startups have great potential in India – The Indian Express

Startups are creating a buzz in India by raising large sums, despite many of them currently making losses. This is because they disrupt the traditional system of doing business and leapfrog to efficiency, winning the trust of potential investors. Agri-startups are no different.

Globally, India is competing with the US and China in the agri-startup space. According to Agfunder, India witnessed an increase in funding from $619 million in H1 2020 to $2 billion in H1 2021, behind the US ($9.5 billion) and China ($4.5 billion) [see figure]. An Ernst & Young 2020 study pegs the Indian agritech market potential at $24 billion by 2025, of which only 1 per cent has been captured so far. Among various agritech segments, the supply chain technology and output markets have the highest potential, worth $12.1 billion.

Currently, it is estimated that there are about 600 to 700 agritech startups in India operating at different levels of agri-value chains. Many of them use artificial intelligence (AI), machine learning (ML), internet of things (IoT), etc, to unlock the potential of big data for greater resource use efficiency, transparency and inclusiveness.

The pandemic helped them catapult and the 2020 farm laws can give them a further boost by providing a legal framework to work with the farmers through FPOs, co-operatives and other collectives. Here, we focus on how some startups in the marketing space are empowering farmers, small agrifood operators, and giving consumers a better deal.

Ninjacart, Dehaat, and Crofarm (Otipy) are a few of the many startups that are redefining the agrifood marketplace. The novelty of startup-led value chain transformation is not limited to empowering farmers but also co-opting local grocery, mom-and-pop, and kirana stores as well as small agrifood businesses that are an integral part of the agrifood ecosystem. At the same time, the startup network is able to leverage the bigger front-end players who demand bulk quality produce and have challenges in directly linking with farmers. This is in contrast to the earlier organised retail (big box) wave that emerged in the mid-2000s, wherein the livelihood of the unorganised retailers and small businesses was perceived to be threatened. 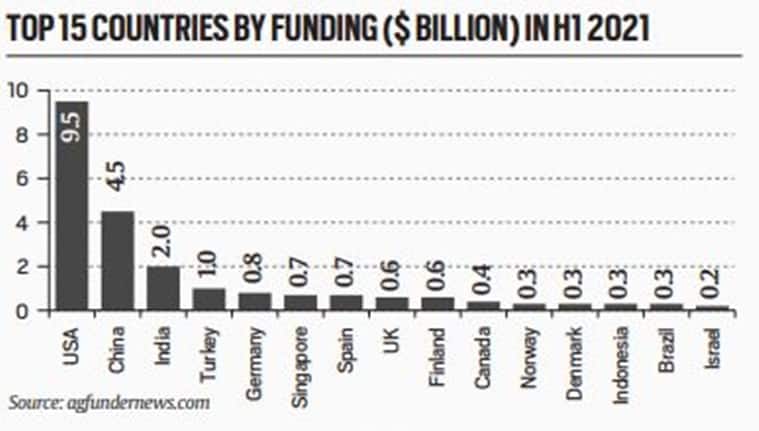 One of the emerging interesting trends is that of multiple models of engagement. Ninjacart started as a farmer-to-consumer (F2C) venture but soon moved onto farmer-to-business (F2B), recognising the need to address the challenges that confront the agrifood ecosystem and achieve greater scale effects. Dehaati Beej Se Baazar Tak is a full-stack agri service startup that engages through B2F (business-to-farmer) and F2B models. It uses data science, agriscience and analytics to nurture a thriving ecosystem of farmers, micro-entrepreneurs and institutional buyers. Crofarm is a F2B digital supply chain that manages logistics, inventory and supply of fresh produce directly from farms to retail chains like Big Bazaar, Reliance Retail, BigBasket and Grofers. Crofarm’s Otipy is an app-based F2B2C social commerce platform that delivers (in addition to grocery and other household items) fruits and vegetables directly sourced from farmers to consumers through their partner resellers.

The agritech startups have a growing footprint. Dehaat is present in Bihar, West Bengal, Odisha, and Uttar Pradesh, working with 6,50,000 farmers through 1,890 Dehaat Centres. Ninjacart sources fresh produce from farms and supplies to retailers, restaurants, grocery and kirana stores, and small businesses and is operational in nearly 11 cities. With a farmer network of 10,000 plus, Crofarm has served more than 1 lakh consumers and 5,000 businesses. Otipy has emerged as one of the popular app-based platforms with nearly 2 lakh customers and more than 8.25 lakh mobile downloads. It currently works with 10,000-plus resellers in Delhi NCR and also present in UP, Gujarat, and Himachal Pradesh. About 70 per cent of the resellers are women.

The startups have had a demonstrated impact. Ninjacart reduced wastage to 4 per cent compared to up to 25 per cent in traditional chains through demand-driven harvest schedule. Logistics optimisation enabled delivery in less than 12 hours at one-third the cost in traditional chains. Farmers’ net incomes are reported to have increased by 20 per cent. Dehaat has enabled up to 50 per cent increase in farmers’ income as a result of savings in input costs, increased farm productivity, and better price discovery.

Agritech startups-led e-commerce platforms have the potential to steer the shift from government-controlled agricultural markets towards more demand-driven digital markets. However, the sustainability and scalability of these ventures will be critical over time. There is likely to be a lot of churning, with many ventures falling out, others consolidating through mergers and acquisitions. In India, the biggest challenge will be to sustain and scale up the farmer outreach.

The startup-FPO partnership can be further strengthened by incentivising the FPOs under the central government’s programme to add 10,000 new FPOs by 2024. The network of agritech startups, incubators, accelerators and investors needs to work closely with policymakers, academia, think tanks, and government departments to develop a more nuanced understanding of the dynamics of the agrifood sector. This will also enable the government and policymakers to leverage the existing agritech pool and co-create solutions for shared value. If policies, institutions and partnerships can harness the current momentum, the startup ecosystem can be the next-generation technology revolution in the agrifood sector.

This column first appeared in the print edition on November 8, 2021 under the title ‘Why start-ups yields harvests’.
Ganguly is a Senior Research Fellow and Gulati is Infosys Chair Professor for Agriculture at ICRIER