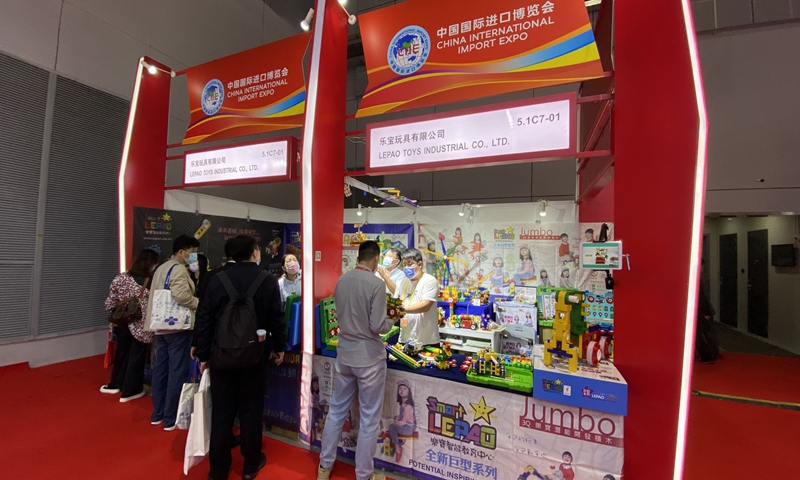 The booth of Lepao Toys Industrial Co, a toy maker from the Island of Taiwan, at the 4th CIIE in Shanghai on November 8, 2021 Photo: GT

Companies from the island of Taiwan are seeking to expand their businesses in the Chinese mainland, as they are actively participating in the 4th China International Import Expo (CIIE) in Shanghai, underscoring the heavy reliance of firms on the island on the mainland market despite escalating tension across the Taiwan Straits.

About 50 companies from the island, covering a wide range of fields from tea and pharmaceuticals to technology and food, are attending this year’s CIIE, according to the official website of the event.

Several exhibitors from the island told the Global Times on Monday that their sales in the mainland market have been smooth and that they look forward to expanding in the market.

“The consumption power of mainland customers is much stronger than that of consumers in Taiwan,” a customer manager at bridal cake brand Isabelle surnamed Hao told the Global Times on the sidelines of the CIIE, adding that wedding souvenirs on the island are usually cookie biscuit boxes that cost about 30 to 40 yuan ($4.7 to $6.3), while in the mainland, the gifts are usually much more exquisite and therefore cost more.

According to Hao, the buying power of mainland customers has been a big stimulus for the company, which has grown to be one of the top three industry leaders on the island, even though it’s just starting operations on the mainland.

Another Taiwan exhibitor, Ebony Splendor International Co, which sells hand-made high-end porcelain, has also seen a similar a consumption boom in the mainland.

The company’s manager Xu Tongyu told the Global Times that sales in the mainland have surpassed that of all other markets, thanks to the mainland’s support measures and rising consumption standards.

At the CIIE last year, the company signed orders of totaling around 600,000 yuan. This year, orders stood at about 200,000 yuan as of Sunday, with several days to go before the event’s conclusion, Xu said.

Mingfeng Nano Biochemical Tech, a hydrogen generator provider based on the island, said that business is quite promising in the mainland, even though it has been selling in the market for just about one year.

“Our company has sold around 20,000 machines since we entered the market, which was a good performance for us,” a manager surnamed Cai at the venue told the Global Times.

Many of the exhibitors said that the CIIE is a good chance to promote and expand their businesses in the mainland, despite strict epidemic prevention and control measures.

Products and companies from the island have seen growing businesses on the mainland despite the COVID-19 pandemic. In the first 10 months of 2021, the mainland’s imports from the island of Taiwan surged by 26.6 percent year-on-year to $203 billion, data released by the General Administration of Customs showed.

source: Firms from the island of Taiwan seek to expand in the mainland through CIIE – Global Times

Mexico’s once roaring auto sector falls on hard times – Financial Times
Once a magnet for billions of dollars
Key Fed official Randal Quarles plans to resign, creating another vacancy for Biden to fill – CNN
The news creates another vacancy at the
Must read×
Top